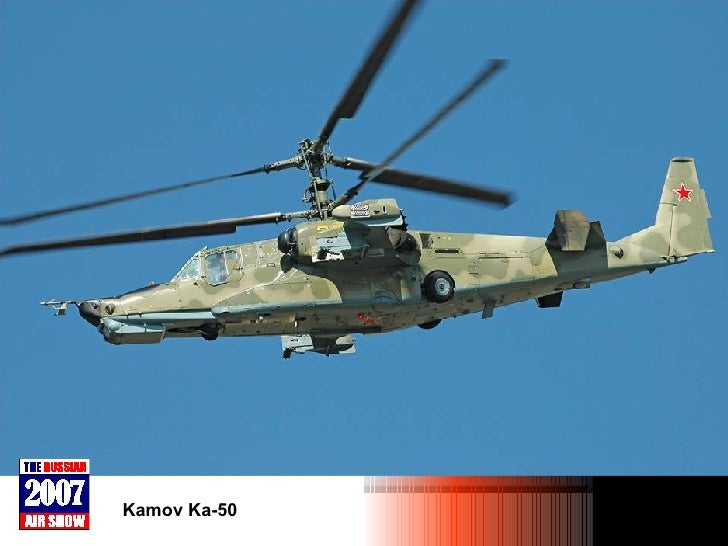 The Ka had a glass cockpit with four flat-panel displays; the systems operator also had a magnifying optical periscope, with its objective in a moveable ball under the right side of the cockpit. The rotorcraft could haul 16 equipped troops. Its features include folding rotor blades, folding wings and life-support systems for the crew members, who will fly in immersion suits. The Ka featured a high degree of composite assemblies and has reverse tricycle landing gear, all gear being retractable — the main gear tucking into the fuselage, the tail gear retracting forward. This page was last edited on 10 April , at The type was seen in action in Syria in , as an element of the Russian intervention on behalf of the Syrian government. The main rotor had four blades, made of carbon-reinforced Kevlar, having swept-back tips; they could resist hits by projectiles of up to 23 millimeter.

They were the last Kas built. KaN Nochnoy, or night.

With the Kas was a Ka to provide reconnaissance and target designation. A maximum vertical load factor of 3. There was an air data boom on the nose, and a rear-view mirror above the cockpit. The Ka’s cannon has variable rates of fire ka–50 selective feed from two ammunition boxes. AIN online, 19 June Its kz-50 performance in difficult, mountainous terrain once again confirmed the usefulness of the many advanced features of the Ka’s design, including its power and maneuverability.

Country of origin Soviet Union Entered service? Of course, the Ka would also be able to carry stores such as unguided rocket pods, cluster or unitary bombs, gun pods, or external fuel tanks, all four pylons being “wet”.

The core of the Ka’s weapon system is the tube-launched Vikhr anti-tank missile, of which kaamov are carried. Self-sealing fuel tanks were fitted in the central fuselage. The first V prototype was lost in a crash on 3 Aprilpilot Yevgeny Laryushkin being killed. The Ka was authorized for fielding with the Russian Army in ; however, by that time it was apparent the collapse of the Soviet Union had largely sidelined the program.

Indeed, it seems the entire production was kw-50 for evaluation, with configurations as mentioned varying to some greater or lesser degree from machine to machine, and often from time to time on the same machine.

Production was to be at the Progress Aircraft Plant in Arseneyev. In comparison to the original Ka, it has a “softer” nose profile and a radar system with two antennas—mast-mounted for aerial targets and nose-mounted for ground targets. The first photograph appeared in This prompted Kamov’s Designer General to choose a modified version of Ka on which to install the reconnaissance and target designation system. In other projects Wikimedia Commons. That going nowhere, the OKB then came up with the “V”, which was a smaller machine that featured wings, with a rotor at each wingtip and a pusher prop, permitting very high speeds for a rotorcraft.

Two prototypes of each were ordered in One was apparently used in trials as a demonstrator for high-speed compound rotorcraft, with a turbojet engine under each wing and a streamlined nose. Later revision of the requirement to emphasize night combat capability led to a reassessment of the Ka, whose production was postponed, in the light of the two-seat Mi’s apparently greater developability for the task.

The Ka is a tandem cockpit variant of the Ka The cockpit dashboard was mostly analog, though it did have a head-up display HUD.

The V featured the coaxial rotor system traditionally associated with Kamov helicopters; investigation showed that the ka-0 blades had collided with each other in the course of maneuvers, with the spacing between the rotor systems increased as a result. Further trials were performed into with the four surviving prototypes, an initial batch of production machines being ordered in that year, being given the service designation of “Ka”.

The pilot got in and out of the helicopter via a forward-hinged door on the left side of the cockpit; there was no matching door on the right, but there was a hatch on top for emergency escape. Inthe Russian Air Force received three units built from incomplete airframes dating from the mids.

The first KaSh was the 8th pre-production aircraft, Bort ; it first flew on 4 March List of rotorcraft — Kamov. Retrieved 24 February